On Saturday June 29 at 7:00 pm the closing ceremony and delivery of diplomas of the VII Master in Classical Guitar Performance of the University of Alicante takes place.

An emotional and exciting ceremony that began with a speech by our director Óscar Santacreu  and our academic director Ignacio Rodes.

Throughout this course, 24 student recitals have been organized. 7 concerts at university venues, we have gone to Almoradí, Cocentaina, Torrevieja, Biar, Elda, Orihuela and Denia. 4 concerts in the neighborhoods of Alicante within the Municipal Culture Program in Neighborhoods. 12 concerts at the Palcio del Portalet, 1 concert with the Elche Symphony Orchestra condected by Mihnea Ignat in Monovar.

Some students of the master offered a small chamber music recital with the following program:

After the recital, the diplomas were handed out to the students of the seventh edition of the master’s degree by the Vice Chancellor for Educational Quality and Innovation D. Francisco Torres Alfosea accompanied by the head of the Culture Service of the Diputación de Alicante Da. María José Argudo and the councilor for culture of the city of Alicante D. Antonio Manresa. 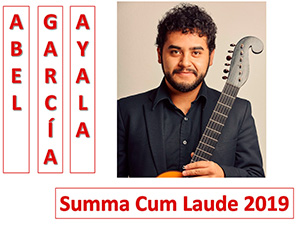