To provide training focused on the interpretation of the guitar repertoire through one-to-one and group lessons taught by top virtuosi.

To develop technical procedures that allow mastery of the instrument.

To acquire a wide musical knowledge and to enable the application of appropriate instrumental resources.

Students whose native language is not Spanish may continue intensive Spanish courses, in such a way as to ensure that at the end of the master, their Spanish skills enable them to cope professionally in a language spoken by over five hundred million people.

2020 Students must be in Alicante on Friday January 10th, 2020 for a planning meeting and opening ceremony.

The program covers a wide range of repertoires, which the students are expected to play in their masterclasses.

Each course takes place over an intense week, from Monday to Saturday, where the professors work individually and collectively with students. Each week starts with a recital offered by the professor.

Each students will have two one-to-one lessons and there will be two seminars covering theoretical approaches to performance.

Regarding the repertoire you’ll be playing during the course, you may choose works or movements from them based on a free election, although you may have noticed that each professor gives his class attending a specific content.

Course on neuroscience and physiology in the instrumental practice

A weekly course (23 hours) about the physiological aspects involved in instrumental performance, stress and emotions and their influence on instrumental practice.

It’s divided into two modules: each students will have a 45 minutes one-to-one lesson and 12 hours of theoretical classes.

This work constitutes an autonomous and personal task of the student. The work will be supervised by a teacher and, in accordance with the rules it will be presented and defended in an academic tribunal. The thesis should include the following sections:

A weekly course (14 hours) about the works for guitar in chamber music.

The repertoire is based in a free selection. All students will be part of  duets, trios, quartets and will attend to a chamber music recital at the end of the master.

Course on performance and conducting practice

A weekly course (12 hours) about the guitar as a soloist instrument and its integration in the orchestra. Practice of rehearsal. 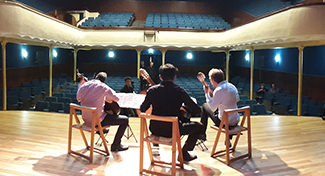 As part of the Master training, all students have the opportunity to perform three recitals around the province of Alicante. Each recital takes 30 minutes.

The third of the concerts will take place in June and will be evaluated.

The master is so intense, that there is no time to learn new repertoire while you are doing the course; all of the repertoire to be played during the six months of masterclasses must be already prepared.

1. The vihuela and baroque guitar repertoire

2. The music of J.S. Bach on plucked instruments

3. The guitar repertoire in the nineteenth century

4. The Spanish guitar repertoire in the twentieth century

5. The non spanish guitar repertoire in the twentieth century

7. Concertos for guitar and orchestra

8. The art of  transcribing for guitar.

Neuroscience and physiology in the instrumental practice